The model is firmly based on the neurological and nervous functioning of man. In The Brain of the Firm (1972) this connection is made explicitly and used as the basis for further work. Much of the description of its development (1972) and its application to business (1979) and government (Mossman(1979)) must be left to the reader to explore. An overview of the work is provided here.

Beer maintains that for a system to be viable five functions must be fulfilled: Autonomous ACTION is COORDINATED on a day to day basis and performance compared against standards derived from INTELLIGENCE or assessment of the environment. This results in internal CONTROL of  effectiveness. POLICY decisions on responses to environmental disturbances are made by comparing the degree of control with the alternatives derived from intelligence.

Beer has labelled these subsystems in the following manner:

The information flows between them are shown in the diagram below: 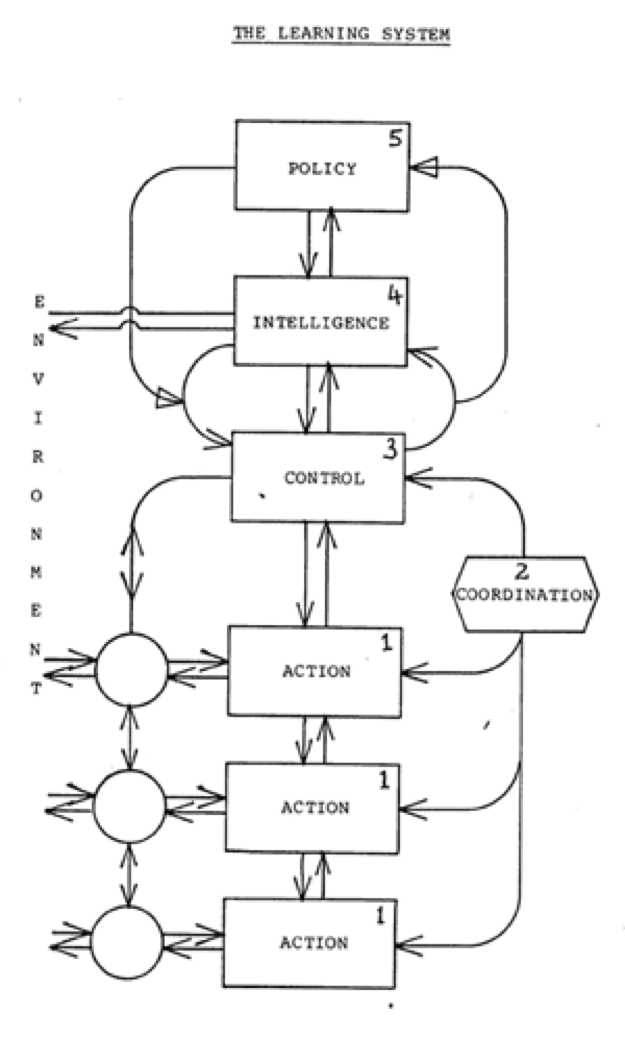 Briefly, each operating system 1 consists of an ENVIRONMENT in which OPERATIONS are MANAGED; information is passed between them to optimise and COORDINATE their own activities (system 2) and to them from system 3 in the form of CONTROLS and, from them to system 3 are passed responses to those controls. System 3 also obtains information directly from operations to check on the success of its attempts at overall control of the various systems 1. System 4 receives information from two sources continuously; from system 3, in the form of comments on the success of its attempts at control and secondly from the environment, in terms of possibilities, threats, and opportunities. These are communicated to system 3 as warnings and forecasts, and to system 5 as scenarios, tentative plans and the like. System 5 then makes policy decisions about which of the alternatives will best allow the whole system to remain viable; to survive in the long term.

This explanation has been couched very much in terms of a business organisation; readers will build their familiarity and comfort with the model by undertaking the same narrative exercise for the viable system in which they are interested. I would be happy to comment if you sent me a copy by email.

System 1 is a viable system in its own right; that is, it contains all of the 5 sub-systems described above. Similarly, the systems 1 to 5 form a system 1 at the next higher level of definition of systems, so any system can be defined in terms of a larger one or smaller one. So fundamentally the definition of a system for attention is determined by the definer. But for that system to be viable, it must have all of these subsystems’ functions fulfilled.