Courtyards are increasingly a part of house design.  Too often they are just added on.  The following extract from The Timeless Way of Building, by Christopher Alexander (pages 109, 110), describes the patterns which help create real courtyards.

… a courtyard which is properly formed helps people come to life in it.

Consider the forces at work in a courtyard. Most fundamental of all, people seek some kind of private outdoor space, where they can sit under the sky, see the stars, enjoy the sun, perhaps plant flowers. This is obvious. But there are more subtle forces too. For instance, when a courtyard is too tightly enclosed, has no view out, people feel uncomfortable, and tend to stay away . . . they need to see out into some larger and more distant space. Or again, people are creatures of habit. If they pass in and out of the courtyard, every day, in the course of their normal lives, the courtyard becomes familiar, a natural place to go . . . and it is used.

But a courtyard with only one way in, a place you only go when you “want” to go there, is an unfamiliar place, tends to stay unused . . . people go more often to places which are familiar. Or again, there is a certain abruptness about suddenly stepping out, from the inside, directly to the outside . . . it is subtle, but enough to inhibit you.

If there is a transitional space, a porch or a veranda, under cover, but open to the air, this is psychologically half way between indoors and outdoors, and makes it much easier, more simple, to take each of the smaller steps that brings you out into the courtyard . When a courtyard has a view out to a larger space, has crossing paths from different rooms, and has a verandah or a porch, these forces can resolve themselves. The view out makes it comfortable, the crossing paths help generate a sense of habit there, the porch makes it easier to go out. More often and gradually the courtyard becomes a pleasant customary place to be. The porch makes it easier to go out but in a courtyard where the pattern of the opening and veranda and crossing paths is missing, there are forces which conflict in such a way that no one can resolve them for himself.

Consider, for example, a dead courtyard surrounded by walls on all sides, with no porch or halfway space between the indoors and the outdoors, and with no more than one, path leading out to it. In this place, the forces are in conflict. People want to go out, but their timidity, which makes them seek a place halfway to the outdoors, prevents them. They want to stay out, but the claustrophobic quality, and the enclosure, sends them back inside again. They hope to be there, but the lack of paths across the courtyard make it a dead and rarely visited place, which does not beckon them, and which instead tends to be filled with dead leaves, and forgotten plants. This does not help the courtyard come to life – instead it only causes tension, and frustrates people, and perpetuates their conflicts. 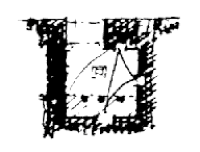 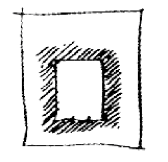