Manfred Max-Neef said we should stop talking about “sustainable development”, and talk more about “developing sustainability”. We see what he means by this over and over, when we hear a report on another big project: “All we have to do now is get the environmental approvals.”

There is more and more talk about “Triple Bottom Line”, but a better approach surely would be “Triple Top Line”; think about it BEFORE we start.

The first question is “What is sustainable?”, then ask “What is socially constructive?”. Only then do we ask “Is it profitable?”. Many inspiring examples of people following this sequence are contained in Paul Hawken’s seminal book “Natural Capitalism”. It is available free and there is an associated web-site. A recent followup is “Up-cycle” by William McDonough and Michael Braungart.

This paper explores the second question in more depth.

Any systematic review of how we are managing today would find that no government, of any political flavour or ideological base, seems to be able to deal well with the issues of governance we face. This suggests there is something intrinsically wrong that we haven’t worked out yet.

I believe that this fundamental (but so far “invisible”) problem is one of scale.

Our systems have grown too big. Our cities are black holes sucking resources from all around the world to maintain them. Our governments are forced to implement broad brush, lowest common denominator solutions that really satisfy very few of the people. But all legal and political systems rely on the support of the vast majority of their people if they are to work well.

We seem to be in a lock step that inevitably leads to a breakdown of the rule of law – the fundamental view of a citizenry that its legal and political system is fair and worth supporting. It is concerning that many op-ed pieces are starting to emerge commenting that democratic decision making processes do not allow decisions on a reasonable timescale.

There are further issues of scale. To deal in any sensible and sensitive manner with any environmental problem we have to fine tune solutions to subtle, detailed, local variations of climate, soil, resources and so on.

We cannot legislate easily or well for effective long term environmental solutions. You only have to look at how much we have learned about environmental systems in the last twenty years to see the inadequacies and clumsiness of our legislative process.

When we look at the scale of social systems, we see companies operating world wide to sell products. We can’t relate meaningfully to the world famous pop stars and sporting heroes the companies pay obscenely for their advertising pull. Nor do we find sustenance on hourly or daily doses of news of disasters from around the world.

In many fundamentally important ways we need to reduce the scale at which we operate, design, think, and lead our lives and educate our children. We need to re-humanise our settlements and our systems.

I call this process VICILIZATION; the latin word for village is vicus. The premise: Civilization has overshot, badly.

Reg Revans, who coined the phrase used in the title, did the empirical work in the coal mines in England that gave Fritz Schumacher his ideas about “Small is Beautiful.” Reg criticised this as a catchy but meaningless title, and proposed the alternative. He found that on every dimension you could measure, smaller coal mines performed better than larger ones.

So how can we reduce the scale of our lives?

Why go to the trouble?

One answer is in the picture below; that was Rosie when she was about four. We now have three grand-daughters; Tessa, Matilda, and Rosie. We want them to live their lives and raise their grand-children in a world that is healthier than ours. We live within 75m of them. They have lived their lives surrounded by the technologies described above. Their experience has to become the new “normal”.

Rosie “messing about in boats” 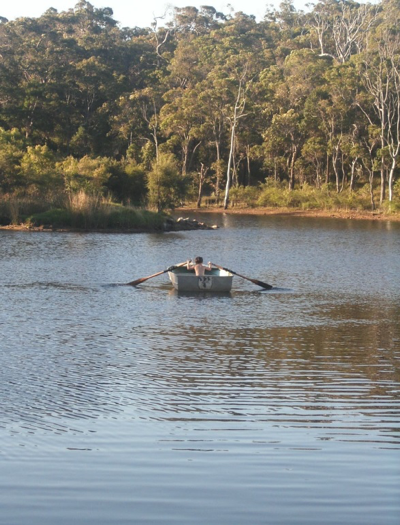